Ceramic fuel cells are considered as one of the most promising technologies for sustainable energy generation, especially for stationary applications, because of their properties which include high efficiency (higher compared to conventional combustion-based power plants), high operating temperatures (600 – 1000 °C) that generate high-grade waste heat, and superior fuel flexibility that allows the direct utilization of hydrocarbons.

To date, ceramic fuel cells are used in a wide range of applications, including stationary power supply, combined heat and power system (CHP), auxiliary power units (APU), etc., and will continue receiving attention as shale gas and biofuels are becoming the premium fuel choices thanks to their low carbon footprint.

However, the state-of-the-art ceramic fuel cell technology still has a long way to go in terms of volumetric power output, long-term stability of the system and most importantly, the cost. For instance, two major types of designs, namely planar and tubular, both have some critical bottlenecks yet to be solved. For the planar design, the most commonly used, the sealing between layers becomes unreliable at high temperatures. This has always been an issue, despite the high-performance it offers.

On the other hand, the tubular design has the advantage of a simplified sealing, but its volumetric power output is several folds lower compared its planar competitor. The attempts to enhance the power output by going small and miniaturizing the ‘tubular’ into ‘micro-tubular’ range have resulted in an inevitable compromise of mechanical reliability. Researchers are therefore on a quest to develop the “perfect” design, which combines the features from both planar and tubular designs.

A team from Imperial College London, led by Professor Kang Li, has developed a new conceptual design to tackle the current limitations. The so-called ‘micro-monolithic’ design is like a honeycomb structure whose mechanical reliability has been well proved in different industrial applications. The cell has been prepared using their custom-developed extrusion set-up, assisted by the phase-inversion process. Such phase-inversion process is evolved from the commercial manufacturing process of polymeric hollow fibre membrane. This process introduces a hierarchical micro-structure in the final completed fuel cells to improve the mass transport property and also helps to miniaturize the overall dimension down to the millimetre scale.

Thermal cycling stability, which is defined as the resistance to damage resulting from temperature changes, is one of the most important requirements for any type of SOFC technology as structural failure is one of the main reasons for high degradation rates. In most cases, the SOFCs are examined post-mortem or indirectly with current/voltage monitoring, both of which offer limited information regarding the chemical, structural and mechanical evolution of the cell under operation. As such, there is a need for in situ non-destructive material characterization techniques that permit investigation of SOFCs in real time and provide direct insight into thermal cycling processes. 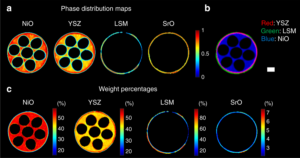 The Finden team joined forces with the University College London (UCL) and the ID15A beamline at the ESRF to use the state-of-the-art facility to perform real-time characterizations of the new fuel cell. This is the first time the X-ray Diffraction Computed Tomography (XRD-CT) technique has been applied on a complete solid oxide fuel cell and indeed during thermal cycling. The SOFC was first activated under the flow of H2 in order to reduce the NiO to the electrochemically active metallic Ni phase and then a thermal cycling test was performed in order to evaluate its mechanical robustness and structural integrity.

The results showed that the cell exhibits excellent stability as the Ni lattice parameter and strain remained consistent for the duration of the experiment. This work not only demonstrates the feasibility to perform spatially-resolved studies of full cells, but also adds a very powerful characterization tool for the SOFC community to exploit and perform in situ and in operando chemical tomographic experiments.

With the advancements in synchrotron brightness (e.g. advent of fourth generation synchrotrons), detector performance (development of faster and essentially noise-free detectors), sample environment (new reactor cells) and data analysis (e.g. Rietveld analysis of XRD-CT data), X-ray chemical tomography techniques are bound to become increasingly easier to use and one can readily foresee that they will replace conventional in situ XRD and X-ray imaging as the preferred method for characterising functional materials and devices (e.g. catalytic reactors, batteries and fuel cells).