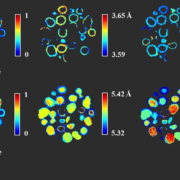 Read the case study at https://www.isis.stfc.ac.uk/Pages/IMAT-Coking-of-engine-components.aspx 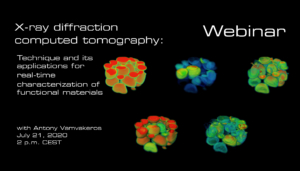 Synchrotron X-ray diffraction computed tomography (XRD-CT) is a marriage between powder diffraction and computed tomography using a “pencil” beam approach. The spatially-resolved signals obtained with XRD-CT can reveal information that would otherwise be lost in bulk measurements, which opens up new possibilities in functional material characterization.

In this webinar, our research scientist Dr. Antony Vamvakeros presented results from key case studies where he and the team applied XRD-CT to track the evolving solid-state chemistry of complex functional materials and devices under operating conditions. The webinar also focussed on the recent technical advances in data acquisition, treatment and handling strategies, as well as bottlenecks/limitations of the technique and the potential routes to overcome them.

For more information and to watch the webinar visit – https://www.dectris.com/landing-pages/dectris-application-webinar-series-2020/

You can see our latest work on X-ray tomographic diffraction imaging of operating dense ceramic hollow-fibre catalytic membrane reactors (CMRs) – “Real-time tomographic diffraction imaging of catalytic membrane reactors for the oxidative coupling of methane” in Catalysis Today. The paper is a result of a collaboration between scientists at UCL Chemistry, Finden, ESRF,  VITO and ISIS Neutron and Muon Source. 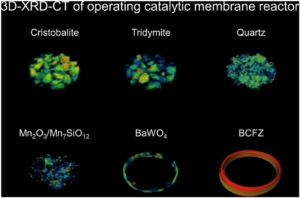 Catalytic membrane reactors have the potential to render the process of oxidative coupling of methane economically viable. Here, the results from operando XRD-CT studies of three different catalytic membrane reactors, employing BaCo0.4Fe0.4Zr0.2O3-δ (BCFZ) and La0.6Sr0.4Co0.2Fe0.8O3-δ (LSCF) perovskite membranes with Mn-Na-W/SiO2 and La-promoted Mn-Na-W/SiO2 catalysts, are presented. It is shown that synchrotron X-ray tomographic diffraction imaging allows the extraction of spatially-resolved diffraction information from the interior of these working catalytic membrane reactors and makes it possible to capture the evolving solid-state chemistry of their components under various operating conditions (i.e. temperature and chemical environment). 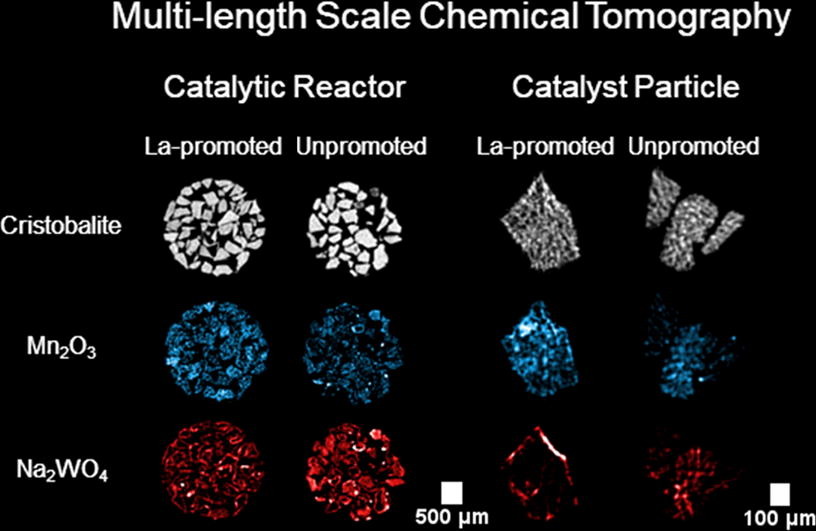 In this work, we present the results from multi-length-scale studies of a Mn-Na-W/SiO2 and a La-promoted Mn-Na-W/SiO2 catalyst during the oxidative coupling of methane reaction. The catalysts were investigated from the reactor level (mm scale) down to the single catalyst particle level (μm scale) with different synchrotron X-ray chemical computed tomography techniques (multi-modal chemical CT experiments). These operando spatially-resolved studies performed with XRD-CT (catalytic reactor) and multi-modal μ-XRF/XRD/absorption CT (single catalyst particle) revealed the multiple roles of the La promoter and how it provides the enhancement in catalyst performance. It is also shown that non-crystalline Mn species are part of the active catalyst component rather than crystalline Mn2O3/Mn7SiO12 or MnWO4.

Finden scientists’ new work on the design and application of a new cell for proton-exchange membrane fuel cells has been published in a new paper, “X-ray transparent proton-exchange membrane fuel cell design for in situ wide and small angle scattering tomography” in the Journal of Power Sources. The cell design and experimental work was performed by Isaac Martens and Jakub Drnec using ESRF’s ID31 beamline.

We have constructed a 5 cm2 proton exchange membrane hydrogen fuel cell optimized for transparency of high energy X-rays. This cell allows for in situ elastic scattering measurements (WAXS, SAXS) during electrochemical operation with minimal trade-offs in cell performance vs benchtop designs, and is capable of reaching automotive current densities. A key feature is that the beam enters the cell at grazing incidence to the electrodes, massively increasing the effective pathlength and therefore the signal-to-background ratio. The transparency in the plane of the sample permits imaging coupled with advanced techniques, such as X-ray diffraction computed tomography. 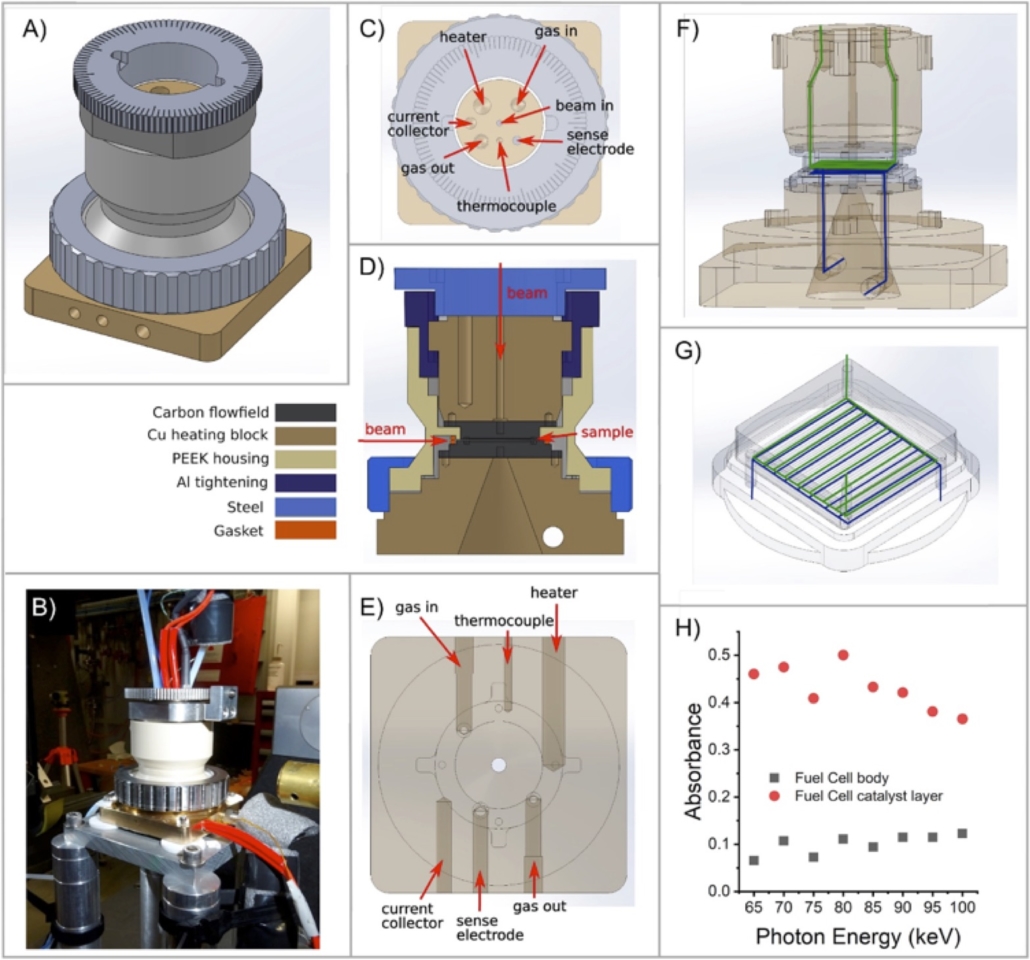 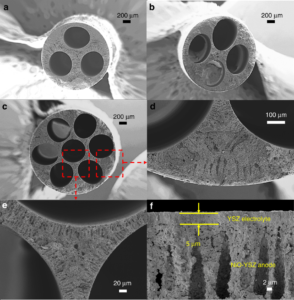 Various micro-monolithic anode supports after sintering at 1450 °C. SEM images of central-axis-view of: a 3, b 4, and c 7 channels; Cross-sectional images of d sponge between the shell and two channels in the 7-channel anode, e sponge between the central channel and surrounding two channels in the 7-channel anode; f close-up image of anode/electrolyte interface

Our new work on a state-of-the-art SOFC has been published in a paper “Design of next-generation ceramic fuel cells and real-time characterization with synchrotron X-ray diffraction computed tomography“ in Nature Communications.

Solid oxide fuel cells offer a clean and efficient means of producing electricity through a variety of fuels. However, miniaturization of cell dimensions for portable device applications remains a challenge, as volumetric power densities generated by readily-available planar/tubular ceramic cells are limited. In our work, we demonstrate a concept of ‘micro-monolithic’ ceramic cell design and evaluate the mechanical robustness and structural integrity of this design, for the first time, with synchrotron X-ray diffraction computed tomography. The successful miniaturization results in an exceptional power density of 1.27 W cm−2 at 800 °C, which is among the highest reported. This holistic design incorporates both mechanical integrity and electrochemical performance, leading to mechanical property enhancement and representing an important step toward commercial development of portable ceramic devices with high volumetric power (>10 W cm−3), fast thermal cycling and marked mechanical reliability. This is also the first time a real-life size solid oxide fuel cell has been investigated in situ demonstrating that such experiments are now possible, adding a very powerful characterisation tool for the SOFC community in general.

The synchrotron experiments were conceived, designed and performed by Dr Antony Vamvakeros and Dorota Matras in collaboration with a team from the Electrochemical Innovation Lab (EIL) from UCL Chemical Engineering using ESRF’s ID15A beamline using a state-of-the-art SOFC designed by Imperial College.

Read more about it at http://www.esrf.eu/sites/www/home/news/general/content-news/general/real-time-characterisation-of-a-new-miniature-honeycomb-fuel-cell-shows-its-outstanding-properties.html 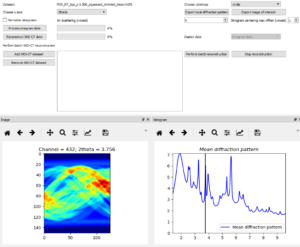 The nDTomo software is now publicly available for download. Developed by our research scientist Dr. Antony Vamvakeros and primarily designed for processing XRD-CT data, it can be used for other tomographic techniques as well. The software suite contains GUIs for the acquisition, pre-processing and analysis of X-ray chemical tomography data. Download it at https://github.com/antonyvam/ndtomo

Our paper on 5D operando tomographic diffraction imaging of a catalyst bed has been published online by Nature Communications, volume 9, Article number: 4751 (2018)

We report the results from the first 5D tomographic diffraction imaging experiment of a complex Ni–Pd/CeO2–ZrO2/Al2O3 catalyst used for methane reforming. This five-dimensional (three spatial, one scattering and one dimension to denote time/imposed state) approach enabled us to track the chemical evolution of many particles across the catalyst bed and relate these changes to the gas environment that the particles experience. Rietveld analysis of some 2 × 106 diffraction patterns allowed us to extract heterogeneities in the catalyst from the Å to the nm and to the μm scale (3D maps corresponding to unit cell lattice parameters, crystallite sizes and phase distribution maps respectively) under different chemical environments. We are able to capture the evolution of the Ni-containing species and gain a more complete insight into the multiple roles of the CeO2-ZrO2 promoters and the reasons behind the partial deactivation of the catalyst during partial oxidation of methane.

Finden Ltd’s techniques for 3D imaging computed tomography appeared in the September 2017 edition of Chemistry World, in the article titled, “Diamonds are forever” which can be found at Chemistry World:

Here is an extract from the article which explains the techniques Professor Andrew Beale, Chief Scientific Officer at Finden Ltd uses,

“Principal beamline scientist Fred Mosselmans has been a synchrotron scientist for 20 years, and a resident of the spectroscopy village since Diamond first opened, where he now runs the I18 beamline … ‘One of the best things [about Diamond] is you see a lot of different science. [Users] have an enormous range of science problems, and the techniques that we have can hopefully address them,’ Mosselmans modestly explains.

‘In the last three or four years, we’ve gone from 2D imaging to 3D imaging computed tomography. We’re doing two different techniques: x-ray diffraction tomography, where we can look at the distribution of the species on the micron scale, and XRF to get distribution of the elements in the sample itself.’ This setup allows him to construct a 3D picture of a sample and watch reactions as they happen, which is just what Andy Beale from University College London is doing.

Beale is exploring how 3D-printing customised supports for different catalysts can improve their performance, specifically nickel nanoparticles on a carbon support. Mosselmans points to one of the screens behind him where a greyish cylinder is displayed: ‘Effectively, we’re probing inside that rod while it’s under operating conditions, without having to cut it open.’

On another screen the results are coming in. ‘[The printing method] isn’t producing the nanoparticles we’re interested in yet,’ Beale explains, ‘but this is a great illustration of how this beamline is giving novel insight into a catalyst … getting spatial and chemical composition information together. We’re calling [this technique] chemical tomography of catalysis.’”