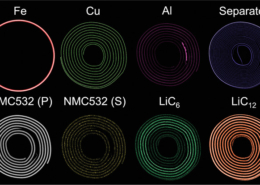 We are excited to share with you our work on a commercially-available cylindrical NMC li-ion battery using XRD-CT. The paper, entitled “Cycling Rate-Induced Spatially-Resolved Heterogeneities in Commercial Cylindrical Li-Ion Batteries, was published as open access in Small Methods: https://onlinelibrary.wiley.com/doi/10.1002/smtd.202100512. The work was led by our R&D Lead Scientist Dr Antony Vamvakeros and Dr Dorota Matras (Faraday Institution/Diamond Light Source) and was performed in collaboration with DESY, UCL Chemistry and SciML.

Synchrotron high-energy X-ray diffraction computed tomography has been employed to investigate, for the first time, commercial cylindrical Li-ion batteries electrochemically cycled over the two cycling rates of C/2 and C/20. This technique yields maps of the crystalline components and chemical species as a cross-section of the cell with high spatiotemporal resolution (550 × 550 images with 20 × 20 × 3 µm3 voxel size in ca. 1 h). The recently developed Direct Least-Squares Reconstruction algorithm is used to overcome the well-known parallax problem and led to accurate lattice parameter maps for the device cathode. Chemical heterogeneities are revealed at both electrodes and are attributed to uneven Li and current distributions in the cells. It is shown that this technique has the potential to become an invaluable diagnostic tool for real-world commercial batteries and for their characterization under operating conditions, leading to unique insights into “real” battery degradation mechanisms as they occur. 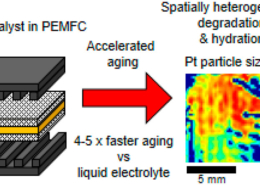 The proliferation of hydrogen fuel cell systems is hindered by a degradation of the platinum catalyst. Here, we provide a device-level assessment of the catalyst degradation phenomena and its coupling to nanoscale hydration gradients, using advanced operando X-ray scattering tomography tailored for device-scale imaging. Gradients formed inside the fuel cell produce a heterogeneous degradation of the catalyst nanostructure, which can be linked to the flow field design and water distribution in the cell. Striking differences in catalyst degradation are observed between operating fuel cell devices and the liquid cell routinely used for catalyst stability studies, highlighting the crucial impact of the complex operating environment on the catalyst degradation phenomena. This degradation knowledge gap accentuates the necessity of multimodal, in situ characterization of real devices when assessing the performance and durability of electrocatalysts and, more generally, electrochemically active phases used in energy conversion and storage technologies.

Finden have joined a network of mediator companies at MIXN.

As mediators, Finden will be one of the companies helping industry access product insight by use of x-rays and neutrons. The network work with advanced synchrotron and neutron facilities across Europe, helping customers work within sectors as diverse as pharmaceuticals, energy, and engineering.

We are pleased to join the network in helping customers access these modern techniques for material analysis.

Finden are pleased to be named as external service providers to the TEESMAT platform (https://www.teesmat.eu/about-us/), “a comprehensive response to the critical bottlenecks faced by EU stakeholders in the field of electrochemical energy storage materials. It leverages EU know-how & expertise from 11 countries and facilitates access to physical facilities, usable data, and industrially relevant services based on novel characterisation solutions.” Finden will be providing our expertise in advanced X-ray scattering characterisation (XRD, PDF, XRD-CT) to help understand the behaviour of battery components, such as performance and durability. Read more at https://www.teesmat.eu/newsteesmat/teesmat-external-service-providers/ 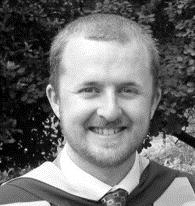 We are delighted our Senior Scientist Dr Stephen Price has received a Faraday Institution Industrial Research Fellowship. He will be working with the FutureCat project to discover, develop and deploy the next generation of cathode materials to drive the transition towards electric vehicles. Dr Stephen Price will be working in collaboration with the University of Sheffield on the Pushing Known Structures theme. He will be applying methods including XRD-CT to the new cathodes developed by the FutureCat project. You can read more about FutureCat at https://futurecat.ac.uk

We present Parameter Quantification Network (PQ-Net), a regression deep convolutional neural network providing quantitative analysis of powder X-ray diffraction patterns from multi-phase systems. The network is tested against simulated and experimental datasets of increasing complexity with the last one being an X-ray diffraction computed tomography dataset of a multi-phase Ni-Pd/CeO2-ZrO2/Al2O3 catalytic material system consisting of ca. 20,000 diffraction patterns. It is shown that the network predicts accurate scale factor, lattice parameter and crystallite size maps for all phases, which are comparable to those obtained through full profile analysis using the Rietveld method, also providing a reliable uncertainty measure on the results. The main advantage of PQ-Net is its ability to yield these results orders of magnitude faster showing its potential as a tool for real-time diffraction data analysis during in situ/operando experiments.

Synchrotron X-ray chemical tomography methods combine a scattering or spectroscopic technique with a tomographic data acquisition approach. These non-destructive methods yield a cross-section of the studied sample where each pixel in the reconstructed images corresponds to a chemical signal (e.g. X-ray diffraction pattern or spectrum). These spatially-resolved signals most often reveal information that is lost in conventional bulk measurements. In this talk, he briefly introduces X-ray diffraction computed tomography (XRD-CT) and presents a few examples where we have applied such methods to track the evolving solid-state chemistry of complex functional materials and devices under operating conditions. In the second part of the webinar, he focuses on our latest technical advances regarding processing and analysis of these large and rich chemical imaging datasets using deep learning methods with neural networks.

Watch a recording of the webinar below: 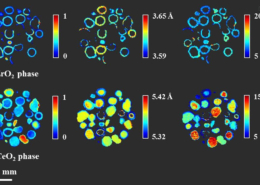 We are very pleased to be featured in ESRF Highlights 2020 – their annual round-up of the most exciting experiments carried out at the ESRF in 2020. Read more on page 164 at http://www.esrf.eu/Apache_files/Highlights/2020/index.html#/page/166